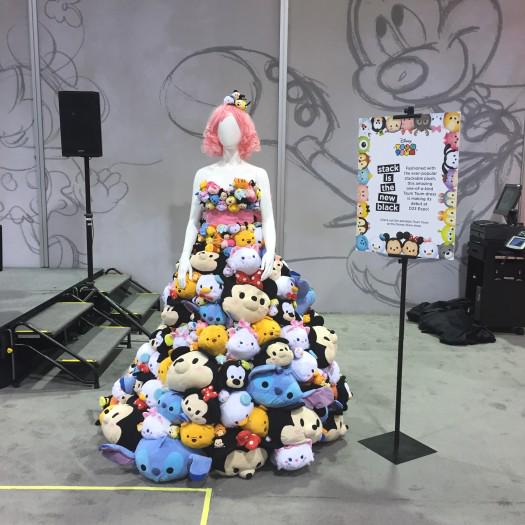 If you were at the D23 Expo this past weekend, you probably saw some amazing cosplay of Disney characters. But, if you were walking down Mickey Avenue on the show floor, you might have seen one dress that took cosplay to another level. That’s right, we made a dress out of everyone’s favorite stackable plushes from the Disney Store, Tsum Tsums.

A look at the Tsum Tsum Dress on Display At the D23 Expo – http://t.co/qEc5UQucHr pic.twitter.com/50A9C2J6tF

How do you go about making an over-the-top cute creation like this one? Well, like all great things, it started as an idea from one of our fellow cast members, Gabby. “The idea of the Tsum Tsum dress came from a recent trip from Japan and their love all cute things,” said Gabby. “Harajuku street is known for having a lot of people wearing unconventional items on their outfits, which inspired a lot of what I do and this dress. I’ve also played a lot with the cute Tsum Tsum game app and then finding out they had plushies, I knew I had to get them too!”

So, just how many Tsum Tsums did we have to get to make this plush-filled ball gown? Over 300 to be exact, ranging from the mini Tsum Tsum size to the largest. Take a look and see just how Gabby and costume designer Elaine created the dress: