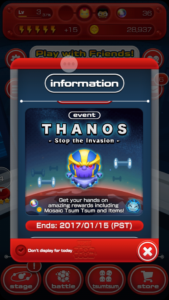 Event: THANOS: Stop the invasion! Get your hands on amazing rewards including Mosaic Tsum Tsum and items! This event ends 1/15/2017!

Mosaic: Clear Tsum Tsum in the middle with a powerful dunk!

-Event limited Tsum Tsum may re-appear in the future

Detonate Bombs and Activate Skills to destroy the Ships and Villains that appear in the Stage!

THANOS will appear at random while making your way through the stage. Defeat him before he escapes to earn rewards!

Points collected are based on how much damage is dealt to THANOS. You can get different rewards based on how many time you defeat THANOS! 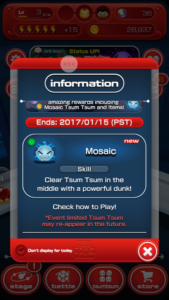