It’s almost time for new tsum tsum Tuesday! On March 3rd,  Disney will release the Frozen Collection. You can stack more than snow with these new Disney Tsum Tsum Frozen mini plush. The Frozen collection was first released in Japan as a set of four with Anna, Elsa, Olaf and Sven. Now for the first time Hans and Kristoff will be joining the Frozen crew.  Get ready to create your own ice covered enchanting ever after with this collection.

The collection includes Anna, Elsa, Olaf, Sven, Hans and Kristoff. The collection will be available in stores and online. The retail price for each mini tsum tsum is $4.95. 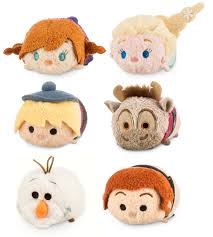 *** Disney also has some special surprises planned this month. So stay tuned and keep stacking

Cute Frozen Fact: Walt Disney wanted to make a  movie inspired by the short “The Snow Queen”, which inspired Frozen, since the 1940s.