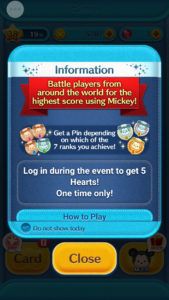 Battle Players from around the world for the highest score using Mickey! Get a Pin depending on which of the seven ranks you achieve! Log in during the event to get five hearts! One time only! This event lasts until 6/26, 11:59 PM! So do this fun event while you have the chance to!

Lucky Time in the Premium Box! Increased drop rate for these Tsum Tsum! You have a higher chance of getting Beast, Belle, Surprise Elsa, and Birthday Anna!

Creates Snowgies with a sneeze! Tap the Snowgies to clear the surrounding Tsum Tsum.

A prince transformed into a beast by the spell of an enchantress. He swipes away a diagonal line of Tsum Tsum with his sharp claws.

An ever inquisitive reader and dreamer. Her skill clears Tsum Tsum in a heart shape as she dances with the Beast!

Beauty and the Beast Update in the Disney Tsum Tsum Japan App!