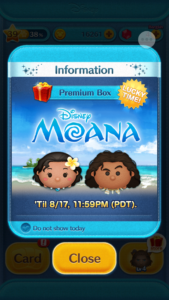 A 16-year-old chosen by the ocean to go on a journey to save her island. Clears a horizontal line of Tsum Tsum, turning Moana Tsum Tsum into Bubbles!

Moana’s travel companion, he’s half god, half mortal, all awesome. Random effect. So random, we don’t even know what it does!

The friendliest and most forgetful fish in the sea! Clears Tsum Tsum in the shape of a Z!