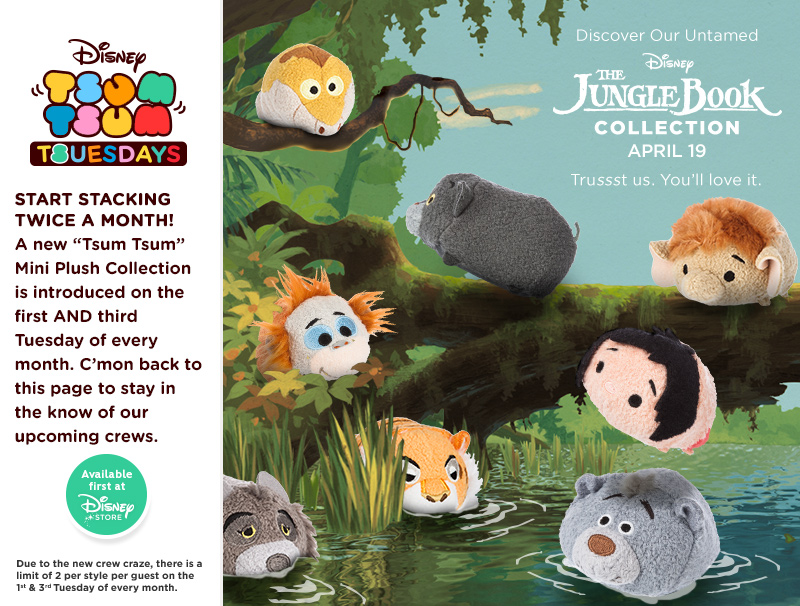 Tsum Tsum Tuesday is getting down to the Bear Necessities on April 19 with the Jungle Book series.  The collection will include:  Mowgli, Baloo, Bagehraa, King Louie, Raksha, Junior, Kaa, and Shere Khan.

The hero of our story is the young Mowgli, an orphan raised by Raksha the wolf.  Though she is never named in the 1967 animated movie, she appears again in The Jungle Book: Mowgli’s Story, and is featured in the current live-action version of the film.

Shere Khan, the man-eating tiger, is out for the destruction of Mowgli.  It’s Bagehraa’s goal to return Mowgli to the man village in order to keep him safe, but Mowlgi defies the panther and ventures off on his own.

He’s not alone for very long; he meets a fun-loving bear with a taste for the simple life named Baloo.  Friends from the start, it’s Baloo who stages a rescue when Mowgli finds himself in over his head with the crazy orangutan, King Louie.

During his adventures, he also encounters the hypnotic snake, Kaa, and Junior, the young son of the elephant Colonel Hathi.

This well loved story has thrilled audiences for years, and now you can have a part of the legacy.  Get the collection Tuesday at your local Disney Store, or at www.disneystore.com.