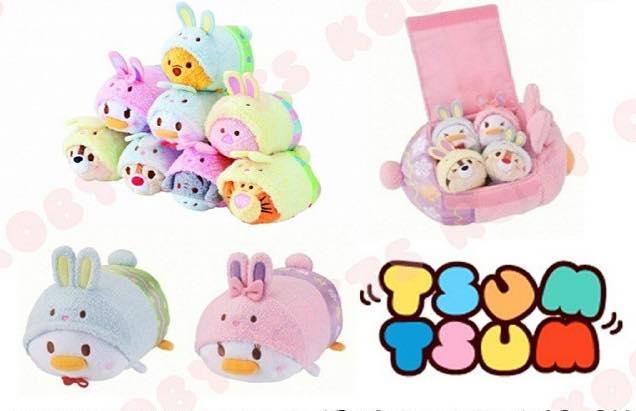 Earlier today we posted photos of the new Easter Tsum Tsums that are being released in Japan.  Thanks to a very reliable source, here are the details.  The Easter Tsum Tsums will be released on April 1 and will retail for 648 yen (about $5.50).  There will also be 8 Different mini Easter Tsum Tsums including Donald, Daisy, Pooh, Piglet, Eeyore, Tigger, Chip and Dale.  Also being released is a Daisy Tsum Tsum bag (Similar to the Honey Pot Collection released today) that will come with 4 Tsum Tsum ‘Wink’ Variants of Donald, Daisy, Chip and Dale.  The bag will retail for 3780 yen (about $32).  Also, Disney is releasing a Daisy and Donald Medium size Easter Tsum Tsum.  Again, we are not sure if these will be released in the US.  Hopefully, we’ll know about a possible US release in the near future.