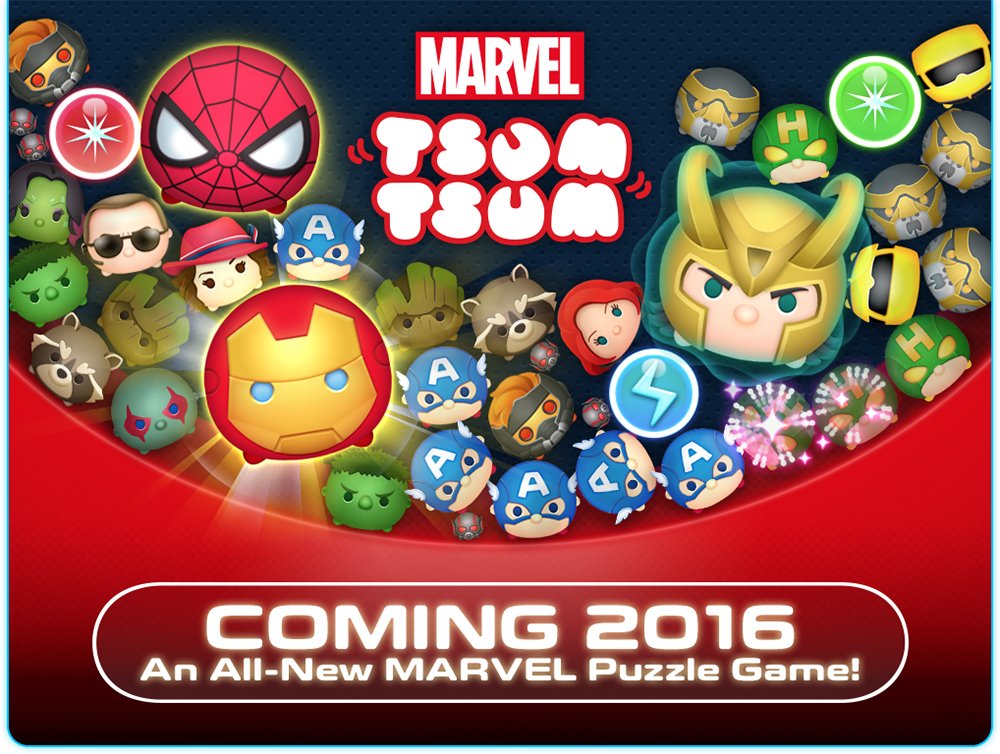 Tsum Tsum fans have been asking for the Marvel Tsum Tsum App ever since it was released in Japan.  Well, ask and you shall receive.  Just announced at San Diego Comic Con, the Marvel Tsum Tsum app will be released later this year for Android and iOS devices in the US.  Marvel.com posted an article featuring Bill Rosemann, Creative Director at Marvel Games earlier today.  Below is a look at the video and interview courtesy of Marvel.com.

Marvel.com: How does “Marvel Tsum Tsum” differentiate itself from the original game?

Bill Rosemann: When conceiving “Marvel Tsum Tsum” with our friends at Disney, Mixi, and NHN, we approached it as a completely original game. We built everything—from the UI design to the playing experience to the story behind the game—from the ground up, all with an eye towards 100% Marvel authenticity. The high concept that we concocted sets the stage for all the fast-paced action, drama, humor and adventure you expect from a Marvel experience: The super-powered Tsums believe they are the real Marvel Super Heroes and must protect their toy store “HQ” –that they believe is actually New York City—and various “worlds”—such as Knowhere and Planet Hulk—from the evil Tsums, who in turn believe they are the real Marvel Super Villains!

Marvel.com: The game features an all-new two-player battle mode, how will that work?

Bill Rosemann: You can team-up with a friend in Battle Mode against Super Villains. When the villain appears on your screen, you will take an offensive role while your partner will team with you in a support role. When the villain runs to your partner’s screen, your roles are reversed, so you have to be skilled at both positions and be ready to jump into either instantly. In true Marvel Team-Up style, when you play as a pair you’re stronger than just battling alone, because you will be able to heal each other and send support bombs to each other to defeat the villain!

Marvel.com: As players progress through the available stages, what locales within the Marvel Universe will they see?

Bill Rosemann: Get ready to travel to iconic locations such as Asgard, New York City, Battleworld and more! But you won’t just be sightseeing, each location features iconic bosses that will stand in your way to clear the stages. Imagine yourself as small as Ant-Man battling Yellowjacket in a toy room!

Marvel.com: What kinds of updates can players expect to see with this game?

Bill Rosemann: The Marvel Games team works with all of our friends from Marvel Studios, Television, Consumer Products, and Publishing to bring the latest and greatest excitement to all of our mobile games, so keep your eyes peeled for new heroes, villains, locations and events each and every week! Not only will our most popular heroes such as Spider-Man, the Avengers, and the Guardians of the Galaxy be battling infamous foes such as Venom, Loki, and Ultron, but get ready to connect Tsums leaping from our upcoming films, TV shows and even from the pages of Marvel NOW!

Marvel.com: What will the character roster look like when the game launches?

Bill Rosemann: We are going wide across the ever-growing Marvel roster with characters ranging from the globally popular Avengers, Spider-Verse, and Guardians of the Galaxy families to new rising superstars. And for life-long True Believers, we’re also going deep into Marvel history by opening the vaults and spotlighting characters from the last six decades! So keep your eyes peeled for new Super Heroes and Super Villains released each moth with themed limited time events. We’re celebrating the diversity of characters from throughout all of Marvel, so we hope everyone has as much fun playing the game as we have creating it!