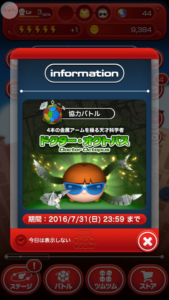 New Tsum Tsum event in the Marvel Tsum Tsum App! Doctor Octopus event! He is a dangerous villain! He has a few extra arms to help him be super strong against who he has to fight. There was an accident that happened to him that caused the tentacles to fuse with his body. The accident also caused him to wear glasses as well. This is a powerful Tsum Tsum villain with a lot of strength.