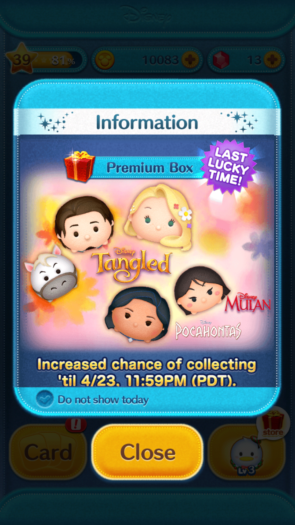 Daughter of Chief Powhatan. All Tsum Tsum connected while the time is stopped are cleared as one chain!

Only daughter of the prestigious Fa family. Pings appear that can be connected to Mulans, which can be cleared for big points!

Horse of the captain of the imperial guard. Clears a diagonal line of Tsum Tsum.

A young girl whose hair has the power to heal and rejuvenate. Lets you connect different types of Tsum Tsum and clears the surrounding Tsum Tsum!

A ladies’ man and professional thief, wanted by the authorities. Rapunzels appear that can be connected to Flynns, which can be cleared for big points!