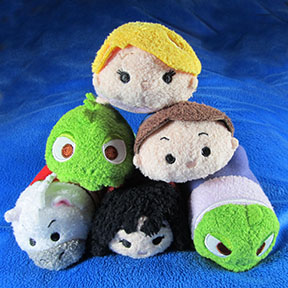 The Rapunzel Tsum Tsums have finally left their tower.  This action pack group was released on Tsum Tsum Tuesday to a big reception.  The line outside the Disney Store was just as long as the line for Star Wars Tsum Tsums, but we purchased our Tsum Tsums and were out of the store by 9:20 with a bag full of happiness.

Mother Gothel has some of the best character hair I’ve seen on a Tsum Tsum.  Even if you haven’t seen the movie, you could tell just by her hair and eyes that she’s not someone to be trifled with. 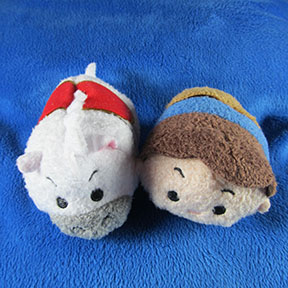 Fynn and Maximus are both ready for adventure.  One of my favorite things about the Flynn Tsum Tsum is his tiny goatee, adorable!  Maximus is one of my all time favorite Disney horses.  The look on his Tsum Tsum face truly captures his character. 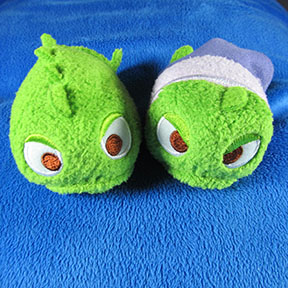 Speaking of character, we get two of the sassy Pascal.  If I could carry the regular Pascal around on my shoulder all the time, I would.  It’s like he just stepped out of the movie.  Like I said in my preview, I love the look on the face of the Pascal in the dress.  Plus, the tails on both of the Pascal’s are just the right chameleon length, and a great touch.

Last, but definitely not least is our lost princess, Rapunzel.  Adorned in her famous purple dress, one of the nice touches on this Tsum Tsum are the embroidered flowers in her hair.

This collection is great with some really cute touches.  If you have a dream of getting the Tangled Tsum Tsums, go to your local Disney Store, or get them online at disneystore.com.