Alice in Wonderland Update in the Disney Tsum Tsum App! By Nicole Hough 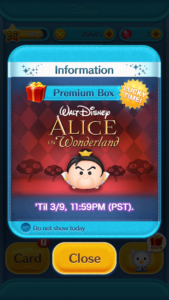 Queen of Hearts: A pompous and vengeful queen. Tap the soldiers to clear surrounding Tsum Tsum!

Theatrical Mad Hatter: A rather eccentric and easily agitated maker of hats. Clears lines of Tsum Tsum in 3 directions. 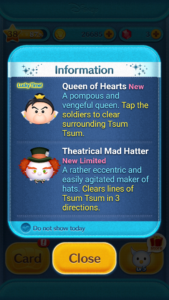 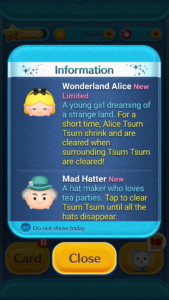 Wonderland Alice: A young girl dreaming of a strange land. For a short time, Alice Tsum Tsum shrink and are cleared when surrounding Tsum Tsum are cleared! 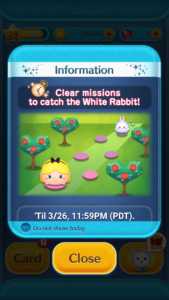 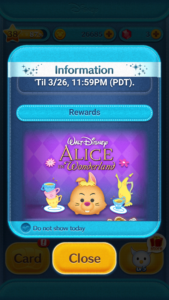 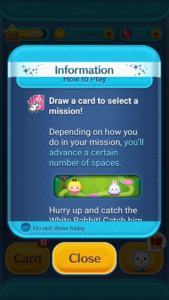 Draw a card and select a mission!

Depending on how you do in your mission, you’ll advance a certain number of spaces.

Hurry up and catch the white rabbit! Catch him enough times and you’ll clear the card!

Draw a joker and you’re in luck!

Capsules will appear during your game! Use bubbles or skills on them two times and they’re yours! You’ll advance as many spaces as you got Capsules!

Clear Capsules with only one hit! 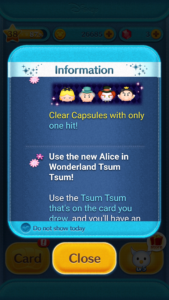 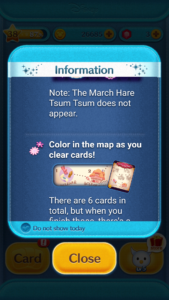 Use the new Alice in Wonderland Tsum Tsum!

Use the Tsum Tsum that’s on the card you drew, and you’ll have an easier time on your mission!

Note: the March Hare Tsum Tsum does not appear.

Color in the map as you clear cards!

There are 6 cards in total, but when you finish those, there’s a bonus card waiting for you!

The bonus card is tough! Give it your all!

Clear the bonus card and you’ll get a gold pin!

-Event Tsum Tsum may return in the future.