As an avid Tsum Tsum enthusiast myself, I totally understand the craze over these new stackable cuties from Japan. With a new collection released every month it is no wonder that children and adults alike eagerly await the arrival of new iconic Disney characters on the first Tuesday of every month in both the UK and the USA.I have witnessed the lengths (and been a part of them) that people will go to so they are able to pick up the latest stackable collectables! Queues of people outside of their local Disney stores eagerly await the store opening ceremony and its end alike so they can pick up their new additions to a rapidly growing collection of totally adorable and very affordable Disney toys.

Just before the release of their new animated film, Disney released 6 new Tsum’s to correspond with the Inside Out film that will be released later this month. You can now take Joy, Anger, Disgust, Fear, Sadness and Bing-Bong along with you to the cinema and watch them play out their roles on the big screen – or you can leave them at home to get up to all sorts of mischief with their growing family if you’d prefer. Don’t miss out on these beautiful limited edition Tsum Tsum just because the film has not yet been released 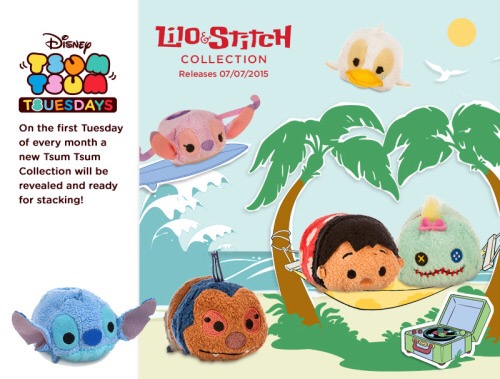 Even more exciting, and a personal favourite of mine, is the announcement that the new Tsum Tsum collection, released on July 7th, will be the (slightly limited) Lilo and Stitch collection. You will be able to add Lilo, Scrump, Angel, the Ugly Duckling and Jumba to your stack and have them keep your, already available, Stitch company whilst you’re not there. Japan will be first to receive the collection at the end of this month, with the addition of a couple of characters (Pleakley, Dr Hamsterviel and Leroy) so make sure you don’t miss out on the adorable stackable Tsum’s we are able to purchase.